The Times is reporting that Chloe Smith is not what she claims to be in her leaflets.

"She describes herself as a “business consultant” but is vague about what exactly she does for Deloitte. Perhaps this is because she is currently on secondment to the Conservatives’ implementation unit. Ms Smith, who is registered as an assistant to James Clappinson (sic), a shadow work and pensions minister, is drawing up plans on how the party would govern once in power."

Whereas Chloe Smith's leaflets state that 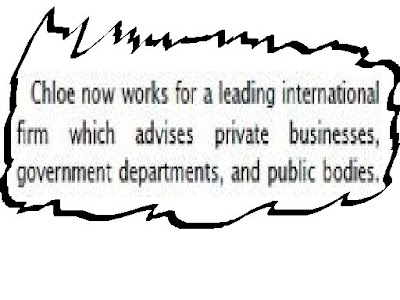 The James Clappison referred to in The Times article would be t whose website links were removed from Chloe Smith's own campaign site.

It would also be the same James Clappison who has been implicated in the expenses scandal after claiming up to £10,000 despite owning 24 houses.

So instead of getting a new broom, or the "change" the Tories are campaigning on in Norwich North, instead we have a party hack who appears to want to mislead people about what her real job is, masks her links to scandal hit MPs and someone who does not live up to their own promises and pledges.

And to think the worst the Tories can say about the Lib Dem candidate is that she has a moat !
Posted by NB at 21:46

You are correct to draw attention to the Clappison connection.

I claim second blood on this rank specimen: although I had already sniffed at his curious expenses claims, I had not noticed the far more noxious odours from his properties claims -- the London Evening Standard got there in one.

My grief, as a North Londoner, was that his constituency (which might be better recognised as Potters Bar) is about eighteen miles from Westminster. Even so, Clappison’s travel claims are interesting: £1,445 for car mileage (469th of all MPs); Rail £6,456 (134th); Air £284 (135th). For what it’s worth, an annual travel card from Potters Bar to all London zones costs £2,660. There are no scheduled air services between Hertsmere and Westminster.

When that went up on my Wordpress site, I suddenly had one of my better "hit" rates (anything to do with the BNP scores better, of course. The abuse less so.)

You know you really annoy me - is this the best you can do - your obsession with the Torie is becoming paranoia. Give it a break Nich for god's sake if not the party's.

You will annoy more people than you convince this way; attacking people not policiy is never a good way to change people's opinion. You are going to be defeated and on this showing you will deserve to be.

But the Tory campaigns has avoided policies. The ones they have mentioned they lied about. On greyhound opening sheltered housing scandal Chloe smith claims tone fighting for justice but the Tory coonvillea voted to block an enquiry.

On the NHS drop in center Chloe smith is fighting to save she omits to mention that it is tory councillors who are the ones trying to close it !

The information that she was working for the Conservatives is available on her own website!

Is that really any worse than someone claiming on their leaflets to be "From Norwich" when they're from, say, Shelton on the Suffolk border like April Pond?

Is that the best you can do ?

If you don't know the difference between where are you from and where do you live, you really need some help.

If we are to ask where "Norfolk through and through" Chloe comes from, it turns out to be Kent.

...If we are to ask where "Norfolk through and through" Chloe comes from, it turns out to be Kent.