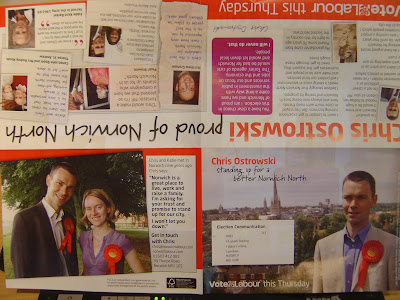 Here is Labour's second freepost. This means they have delivered two leaflets to the city wards, one to other wards, they've had two freeposts, and one posted. This is an unbelieveably poor effort for a held Labour seat. 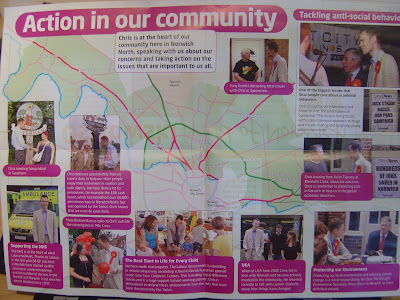 On top of that I was phone cavassed this evening. It perhaps says much about Labour's campaign that this is the second time they have phoned in a month and I told them last time I was a Lib Dem member. They didn't know I was a postal voter (we used to tag postal voters on the computer in North Norfolk for each and every election as soon as the lists were given to us). This is the sign of campaign with no organisation and no proper leadership.

The fact the guy laughed when I told him I would be surprised if he found many Labour voters. The response that "I have found a few but I have been phoning all evening" says a lot.
Posted by NB at 20:17

That is truly shocking. At least in Crewe and N, there were people willing to vote Labour.

What are the odds that Labour could finish 4th?

It is shocking Nich.

Though when I am ever told that party A is "only" doing X of print while parties B and C are doing 10X I do worry so about the latter's respect for the expenses limits.

What is the limit for this by-election?

Are any Risos, folders, stuffers, labellers or whatever being used by any party funded in any regard by the taxpayer?

Are there any unaccountable, unincorporated "Printing Societies" involved on behalf of any of the parties?

Sounds like the 'phone canvasser is doing unknowns and potential squeezes and would therefore only expect a smallish proportion of new Labour iDs. Also an amateur. Perhaps from out of area on virtual 'phone bank which might explain absence of PV info. Or operator error.

Are other parties using professionals? And how will this impact on their expenses returns?

I still think the Labour literature, from what you're showing us, is nicely designed and wins by being positive, while the LibDem stuff is poorly designed and too full of knocking copy. I'm sorry to have to say this, I'm still a member of the party and want the LibDems to win this one. But if I were neutral, I wouldn't be tempted by the stuff we're putting out.

I know the tactic is sheer relentless quantity of the stuff, so that may do us well in the end. Plus the Tory and the Green do come across as well-meaning but very, very dim. So we may do well, but I'd rather we did well on the basis of a campaign I could be proud of, and sorry, but that one isn't that.

I completely disagree. Labour's literature has been unremittingly boring, says nothing about policy and had nothing to say. No wonder apathy is winning when the party who hold the seat have nothng to say.

Local people tell me that they have failed to be impressed by Labour so I think that speaks volumes.

ChrisP: "Are other parties using professionals?"

If this is a typical by-election, half our canvassers are using yoghurt pots connected by bits of string.

By-election limit is £100k.
Thats quite a lot of riso'd leaflets.

Nich, I'm going only on what you have shown us in this blog.

You say the Labour literature says nothing about policy, well what it says is pretty light, but any lighter than ours? No. Ours seems to be just as free of policy, it's almost all attacks on the others and very bland stuff about the candidate, just as bland as all the others.

Labour's may be boring, but so is ours - isn't this "nah-nah-nah-nah-nah" stuff attacking all the others what's putting people off politics? Sorry, but when I glance at it, all I think is "Oh, here's yet another politician slagging the others off, BORING".

I think we could get away with that sort of stuff when we were the anti-establishment going for the protest vote, but I don't think it works so well now people see as as just another mainstream political party.

I think Labour have got it tactically right by putting out leaflets which are eye-catching in terms of colour and nice images and balance in design if boring on written content, and which are positive and avoid slagging off the others.