Does the Tory Chloe Smith know that Cromer is not in Norwich ?

Looking at the quotes from the leaflet she says she is pushing the council to address road problems across the Cromer area. Cromer, that is, in North Norfolk. Presumably too the council she is pushing (note they are not doing it voluntarily as they should) would be Tory run Norfolk County Council. Spot the headline "Tory candidate says local Tory Council won't do it's job and have to be pushed to do it." 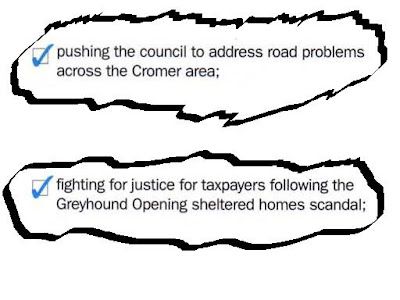 The reason for highlighting the second quote is simple. The recent housing scandal in Norwich was indeed something that people deserve answers over. But when the Lib Dems proposed and independent enquiry in to what happened the Conservatives voted with Labour to prevent this. Yes, the Tories voted for secrecy and no justice. Where was Chloe when this was happening ? I don't remember anything from her on the issue.

So how does this fit with the campaign pledge Chloe signed ?
Posted by NB at 09:19

I bet they meant to say Crome, but added an R by accident! haha

If you see her blog - you'll see she's already reported the typo caused by the printers doing just as you said and adding the R to the word!.

The girl is on the ball!

But it was printed by the conservative party at their print centre. You are "on the ball" if you spot it before it is printed.

Ask anyone who is actually from Norwich where "Crome" is - unless they are involved in local politics they will look confused, maybe mention the "Crome Centre" that closed many years ago and be of no further help. "Crome" is merely a local council division. Referring to it by name in a leaflet rather than actual place names perhaps suggests the "local" Tory is not as "local" as she would have us believe.

Crome was a painter of the Norwich School. The ward is named after him.

Absolutely. The name has no geographical significance for the area. Not sure the local Conservatives have grasped that.