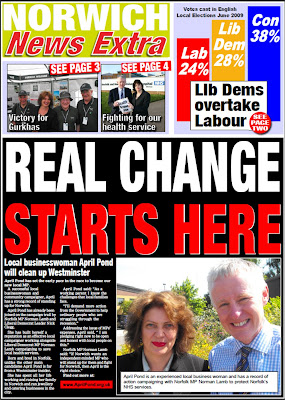 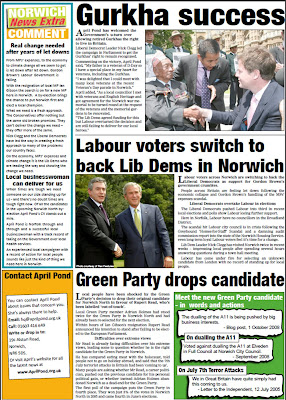 No sooner does the 4th Tory leaflet arrive than a Lib Dem response comes keeping the leaflet score at Conservative 4, Lib Dem 4, labour 1, UKIP 1, and the others all zero. I am asking work colleagues to keep track too with a friend of mine in Hellesdon saying he has had no Labour leaflet at all and nobody I know having received anything from the Green Party.

I have heard rumblings that the Green Party are finding it very hard indeed to get the leaflets out. In Norwich in recent years they have won lots of council seats on the basis sometimes of being the only party actually working some wards, which means they have picked up seats with relatively little effort. This by-election is different. Lots and lots of Tory and Lib Dem activists are arriving by the day and the Greens simply cannot get one leaflet out in two weeks ! This has not been aided though by the machinations involving their change of candidate which has, according to people I know with Green friends, not been entirely popular.

Anyway, thanks to Chris for e-mailing me a digital version of the new Lib Dem leaflet which saves me photographing it badly ! 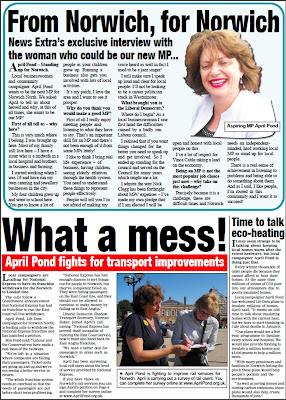 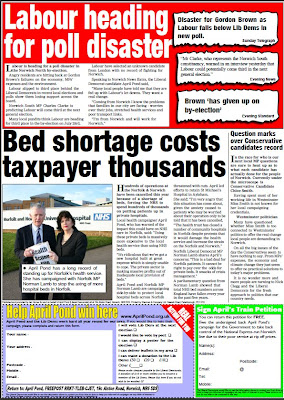 None of the above said...

Gawd, not more 'vote for real change' rubbish. Is it beyond with of man to come up with something more positive - vote for something 'better' might be a start.

Still, I'd be interested to hear the eating meat comparison to the holocaust, from Rupert Read. I love self-righteous and smug people and also collect exaggerated comparisons to the holocaust. I feel I might be in heaven with that double whammy.

I wonder if you would be so keen to publish a digital version of the Conservative leaflets if they sent them to you ?

I certainly would be prepared to publish them I have no problem with that. The only problem is the Tories won't do it !