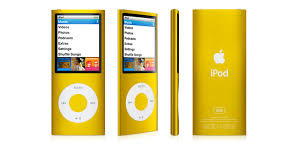 I have always been a but reluctant to follow the crowd. This is probably why I am a Lib Dem and an Everton supporter too (my support for Norwich is a local thing, much like supporting England, but Everton are my first team). So when MP3 players started to become the ideal replacement for older music players, I was somewhat reluctant to follow, sheep like, all the way to Apple and their iPod. My wife was also less than keen on their rather box like simplicity and instead opted for another brand, and in an attempt to avoid lots of competing cables and chargers, I later bought the same as her.

Now, nearly 5 years later, our MP3 players were on their last legs and my wife decided she wanted a new one for her birthday. Somewhat inspired by seeing someone elses new iPod Nano in a flashy colour, my wife decided that the Apple iPod was the way to go, and again to avoid clashes between competing cables and pc based media players, I too have bitten the bullet and bought an iPod Nano.

Now for me, this is a big step. I have always slightly resented that fact that any one company can have so much of the market in the way Apple do. On top of this I react strongly to those who would buy anything with an Apple logo on it. There are some people I know who would buy cat shit if apple sold it as iCatShit.

So how am I getting on with it ? Well, sort of okay. The gadget itself is a simple and fairly straight forward device. My problem is the iTunes software. I am at a loss as to why some parts of it are counter intuitive ? Why did it refuse to recognise my iPod all afternoon until I went through several lengthy procedures in order to reset parts of the system until it again recognised my iPod ? It's not a great problem overall for me to work out a way around some of the problems. But for anyone not PC savvy, it would have been a nightmare and Apple's support both in terms of printed instructions and web support is not that impressive.

In truth, I am getting on with the iPod fine, but it is always somehow slightly satisfying to find that something you were resistant too (in this case the software) actually does justify why you have been against it for so long.
Posted by NB at 23:14

iTunes is probably the clunkiest thing about it. Not the software itself, but it does sometimes decide not to recognise or sync a device connected to it.

However, as an MP3 player itself, I still believe there is nothing simpler to use.

Glad you came round to y way of thinking Nich :-P

Before I go any further, I should declare that I haven't used anything other than Apple kit since 1990. Having said that, I a pretty pissed off that last week I bought a £700 Apple LED display that doesn't work with my Gen 1 MacBook Air... The Apple website is a little less than clear in some crucial areas.

I disagree with you about the problem of Apple's market share. Apple have massive iPod market share because of their understanding of what people want. They were by no means the first into the personal MP3 player market, but to my mind the combination of iPod and iTunes / iTunes Store makes every other offering look clunky.

Admittedly, the iTunes App on Windoze suffers from application / hardware issues dependent upon the hardware. But then, so does Windoze.

BTW, iCatShit? Only in Norfolk...

Paul, people always moan about Windows and use that as en axcuse but I have many other gadgets that never fail to be recognised by Vista.

Also, why is iTunes so difficult to make a playlist in ? Why can't I delete songs via my iPod rather than ahving to do it via iTunes ? Why is Apple;s software and menus so counter intuitive ?

Nich, I take your point about not being able to delete from the iPod. It is not something that I ever considered, but it does seem to be a good idea.

I think Playlists are easy to make. Press the little Plus sign in the bottom left corner. As for the menus being counter intuitive, perhaps I am used to it, but it mostly seems straight forward to me.

What are the chances of Ming becoming the next Speaker?

Bought one for Mrs Q at Christmas. She loves it.
Decided the gramophone was a bit unwieldy and switched to MP3 myself.
I've tried both, borrowing Mrs Q's nano..the Apple is the difference between being Prince and being King. King is better.

Paul, the chances of Ming getting it are low after the money spent on his London pad, although his spending is insigificant compared to those MP's who changed their second home details time and again.

Given my happiness with Apple product- in that they work - I might consider iCatshit if I had a cat: I can trust the company. No it's not a saintly company, but they sell good computers.

Playlists are a doddle - think you were pressing the wrong button.

And why would you want to delete music via the iPod when your library would update it again next sync? That's the whole point of having iTunes as your library of music!!

I think, in the nicest way possible, you're thinking counter-intuitively

It's classic Apple in my experience.

Does some things really well.

And if it goes wrong, it sure can be an utter pain to fix.

Welcome to the world of Apple!

Starls - You listen to your music, you hear a track you will never listen to again or wonder how it got on to your iPod so you think "I'll delete that now", but no, you have to wait to do it when attacked to a computer. It's a portable device for goodness sake !!! Why should it have to be plugged in to something else ???

Also, as for syncing, why wouldn't iTunes be able to recognise files for deletion ? Any decent programmer could do this.

Wait until your laptop breaks /is stolen / destroyed by aliens.

What's that you say? Sick of your iPod? Brought a new WhateverButNotApplePod and want to transfer the tunes you brought from iTunes? Nope.

Explain to me why Apple fanboy's rant about Microshit again?

Open Source is the future....